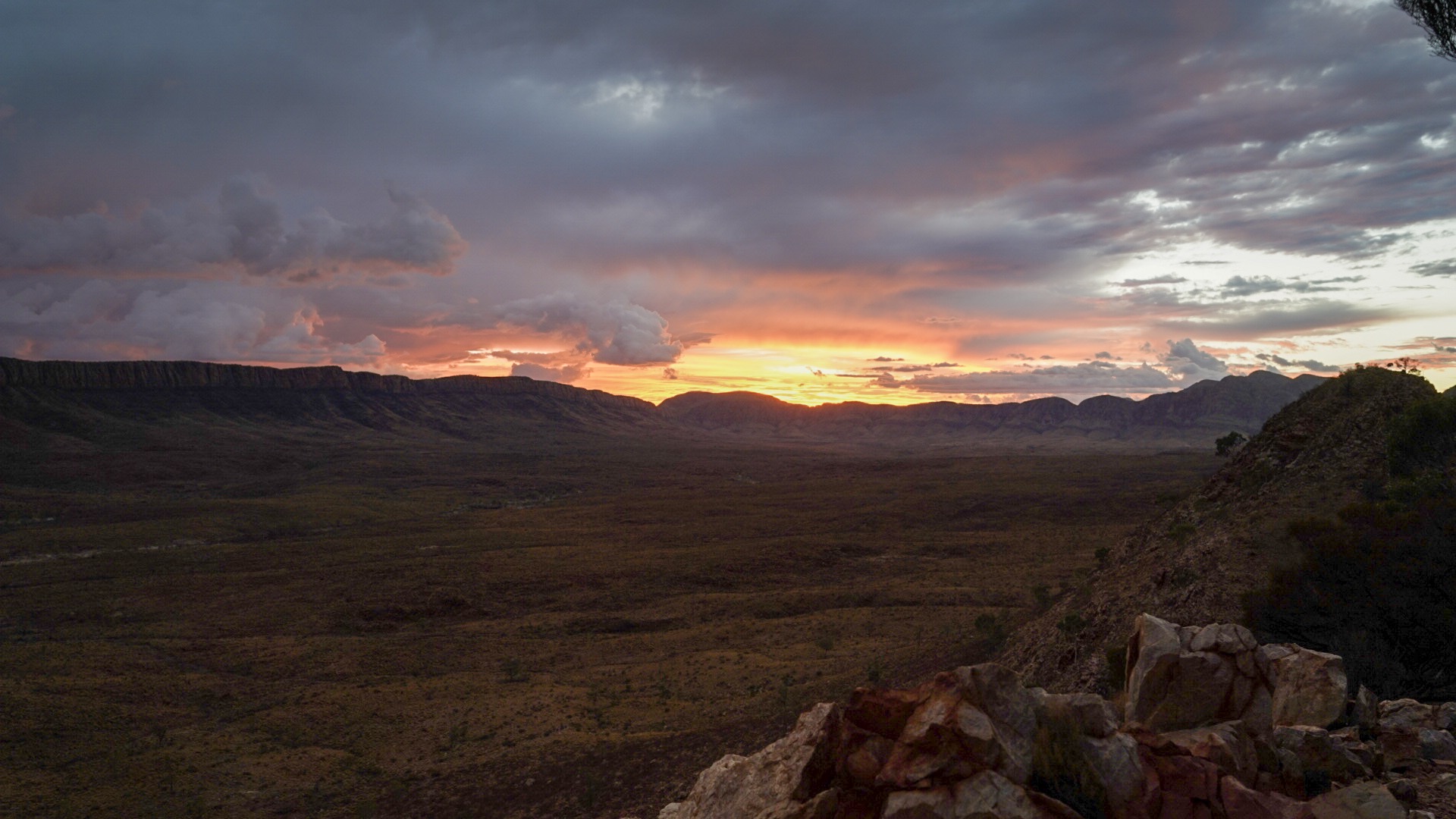 Discover the ancient wonders of Uluru and Kata Tjuta in the heart of Australia’s Red Centre. 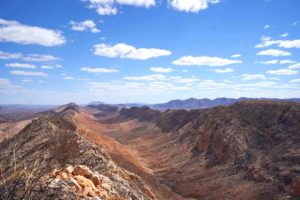 When the ancestors awoke, there was nothing. The universe was dark; the Earth was lifeless. There were no stars glittering in the sky, and the moon was invisible. The ancestors had lain sleeping, deep in the ground, through the long ages before the Dreamtime. But now their sleep was at an end. As they awoke from their long, long slumber, they brought forth the first morning of the world.

As the ancestors emerged from the ground, stretching out their bones and flexing their twisted and knotted limbs, they began the long task of creating the world. They carved the rivers through the red rocks, and pushed up the mountain ranges. They filled the country with animals and filled the skies with birds. They created the people, and sang the songs that described the lands. And they painted the landscape with the details of the Dreamtime stories for all people to see.

The laws of the country

At Uluru, you can come face to face with these Dreamtime stories, etched into the flanks of the great red stone that white men named Ayers Rock.

Archeological evidence suggests that Aboriginal people have lived around Uluru for at least 10,000 years. According to the tjukurpa (pronounced “chooka-pa”), or law, of the local Anangu people, Uluru was built by two boys who played in the mud after the rains which followed the creation.

In Anangu legend, the three central ancestral beings of the creation were the Mala (rufus hare wallabies), the Kuniya (woma pythons) and the Liru (poisonous snakes). The stories of each of these beings is engraved onto the surface of Uluru in the form of protruding rocks, snake-shaped cracks, ocular caves and dozens of vaguely human and animal profiles.

One of the Dreamtime legends that you can still see depicted in the natural shapes of Uluru, tells the story of Lungkata, the blue-tongued lizard.

Long ago, Lungkata traveled up from his country to Uluru. He came across Panpanpalala, a bell-bird man, who had killed an emu and had set about cooking it. The bell-bird man was asleep, so Lungkata stole the emu and took it to a hideout, a small cave high up on the flank of the rock.

When the bell-bird man discovered that his emu was gone, he went up to ask Lungkata if he had seen it. Lungkata replied that he hadn’t. But Lungkata had broken a sacred law by stealing the emu, and as punishment for this, the bell-bird man set fire to the rock. Lungkata was burned and fell to his death.

Like all Dreamtime legends, the story of Lungkata is a blueprint, a route map, a recipe book and a parable. The information imbedded in this, and every Aboriginal legend, has been passed down through the generations.
With each telling, more information would be added to the story. So a person traveling to Uluru would be able to go over this, and other stories, in his mind and divine the best route to follow, where to find food and water, how to cook the food he found, and how to behave when he reached his destination.

To the untutored European ear, Aboriginal stories seem nothing more than quaint works of fiction. Yet the parable of Lungkata has a deep significance for modern visitors to Uluru. In the eons of time before the arrival of Europeans, only initiated Anangu men were allowed to climb Uluru.

But the advent of mass tourism at Uluru saw huge numbers of people clambering up the steep path to the top of rock each day. Accidents were bound to happen, and when a person fell to their death, or was injured on Uluru, the Anangu saw it as evidence that the legend of Lungkata was still true.

In 2017, the board of the Uluru-Kata Tjuta National Park voted unanimously to stop people from climbing Uluru because of the spiritual significance of the site, as well as for safety and environmental reasons.

For people in the know, however, the nine-kilometre path around the base of Uluru had always been a better option for experiencing its majesty and sacredness anyway. 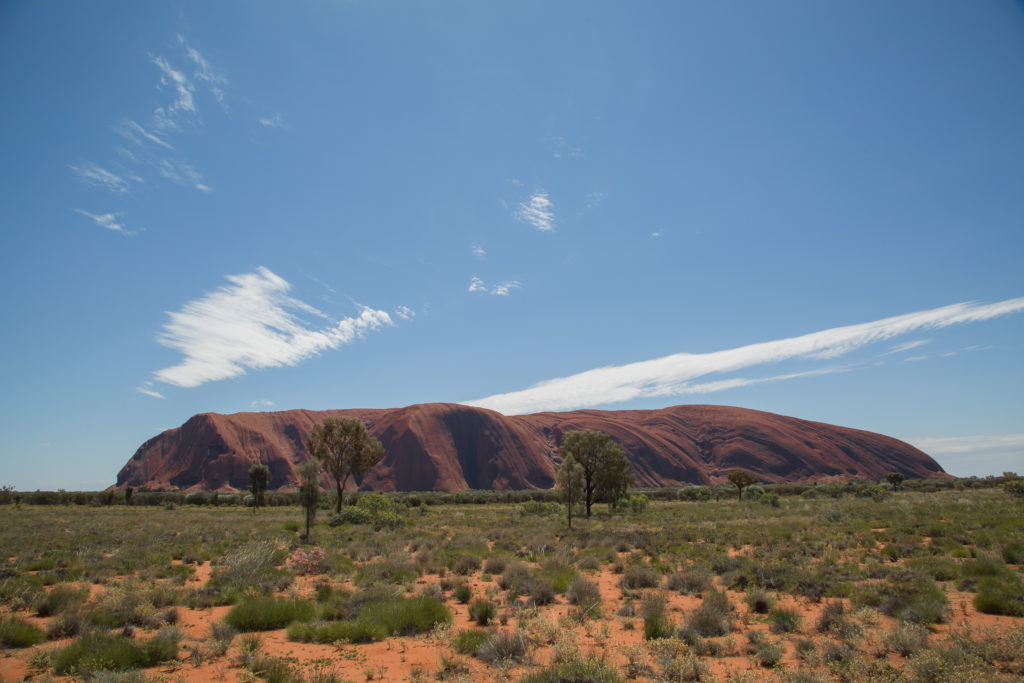 Walk the perimeter of Uluru

When you hike around Uluru, you can get up close and personal with its features in a much more intimate way than the climb provided. The rock rises from the desert in great billows like an enormous petrified wave. Its deep red colour is bought into sharp relief by the intense blue of the sky. Iron oxides run in stripes through the stone, which feels cold to the touch, like the skin of an ancient reptile.

It is easy to see how the Anangu can read stories into every crease and bulge of Uluru. When you pause for a rest in the sparse shade of a bloodwood tree, you can stare up at the rock and see dingo’s paws, a human face, the pock marks of spear-thrusts, and the outlines of coiled snakes.

The sandy path underfoot is the colour of chili powder and every bit as hot. Occasional breezes come out of nowhere, blow for a few minutes, then fade to nothing. These desert zephyrs, however fleeting, will be a welcome relief from the heat, and will make you less envious of the tourists cruising by in air-conditioned buses.

It takes about three hours to circumnavigate Uluru. As you explore the rock’s recesses and gorges, you began to sense the endlessness of time out here. The monolithic bulk of Uluru, and the domes of nearby Kata Tjuta, and have seen the sun rise for billions of mornings. Humans, on the other hand, have existed for a mere eye-blink of time by comparison.

If you drive west from Uluru, the sun dissolves the road into a shimmering mirage. The landscape swims and wobbles in the heat as if you are looking at it through a glass bottle. The sky takes on the colour of burning magnesium, and the domes of Kata Tjuta rise from the desert like a cluster of giant marbles.

To the Anangu people, Kata Tjuta (also known as the Olgas) is also a deeply sacred place. For thousands of years they have lived around these 36 strange red rocks, whose name means “many heads.”

The domes are composed of orange pebbles, cemented together with coarse red gravel the consistency of crumbled biscuit. Time, wind and water had sculpted their sheer sides with stripes, grooves and fissures.

As you climb from the car park along a trail between the peaks, you enter a narrow gorge, constricted between the sheer walls. The rock seems to lean inwards until the sky is reduced to a crack of cobalt blue overhead.

A wooden observation platform stands amid stunted bushes at the head of the gorge. If you are lucky enough to be here at sunset, the spectacle is amazing, as the rocks change colour from minute to minute: turning deep red, then to pink and mauve.

Sunrises have been lighting up Uluru for the past 109 billion mornings. In the chilly darkness before dawn, the bulk of Uluru is nothing more than an area of blackness against the starry sky. But as the light grows stronger, the rock begins to glow, first a pale blue, then violet, and finally, in the instant before sunrise, a rich ochreous red.

Most of the tourists only stay for the sunrise. But if you linger, you’ll find yourself alone in the wakening desert, like the ancestors who awoke and dreamed the world into existence.

At Uluru and Kata Tjuta, Aboriginal people have found all they need in order to sustain their culture, the oldest on Earth. They recognize the interconnectedness of all things: from grains of sand to the mightiest of mountains.

We Europeans see the land as a resource to be exploited and changed to suit them. Aboriginals, on the other hand, see themselves as keepers of the land, and strive to keep it the way it is.

To them, Uluru and all of the surrounding country, the people, the animals and all of the natural world, are parts of the never-ending legend of the Dreamtime.