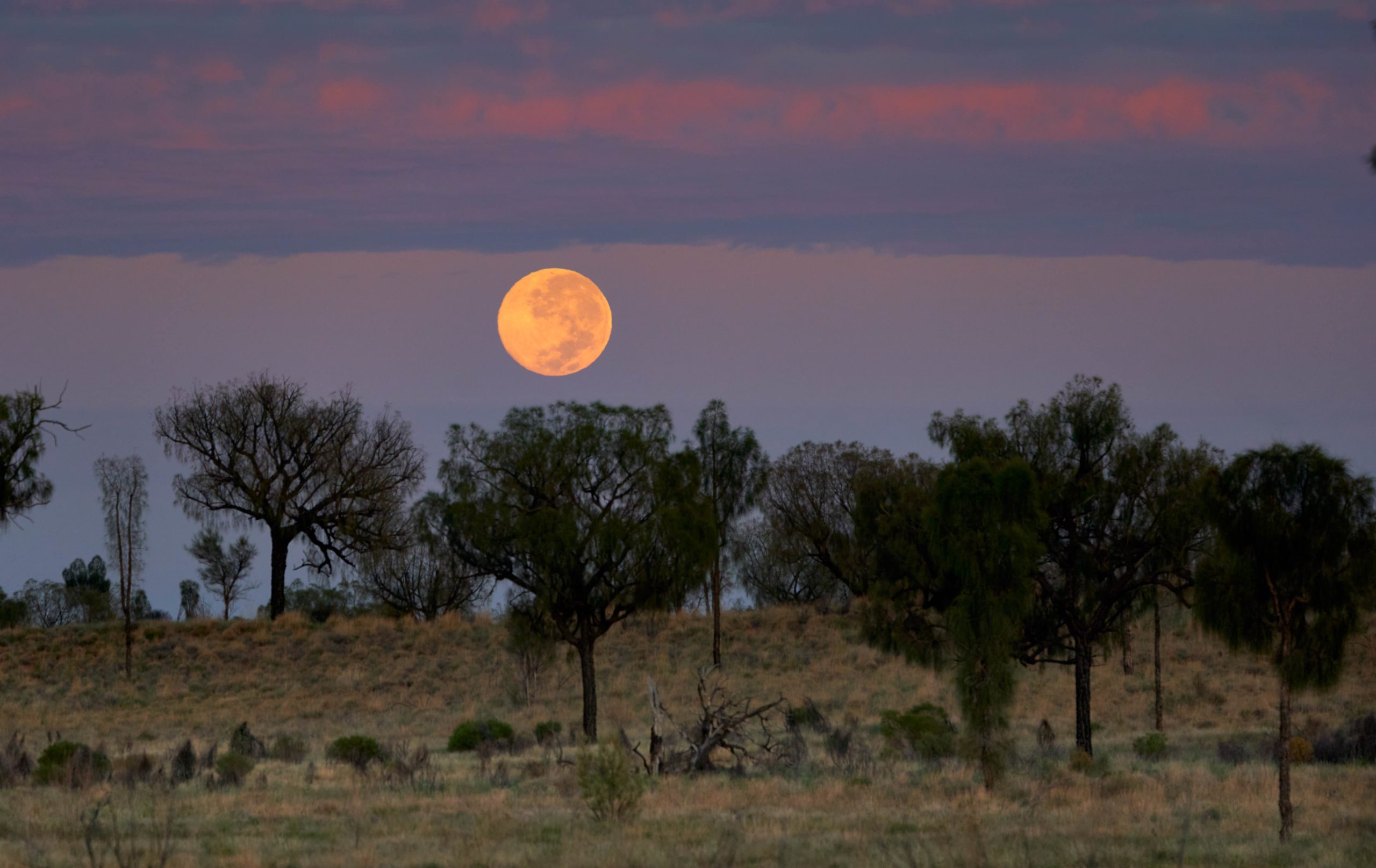 Before the Dreamtime there was nothing. The Earth was flat and lifeless; no stars glittered in the sky. The universe was dark and silent. The Ancestors lay sleeping, deep in the ground where they had passed the ages. But the Ancestors were restless; their long sleep was nearing its end. On the first morning of the world, they awoke, flexed their ancient limbs, and began calling the world into existence.

Emerging from the ground they created the stars and the moon. They created the animals – the frilled lizards, the snakes, and the kangaroos – and the rains. They brought forth all the rainbow-hued birds and created trees in which they could live. They made the people, the laws and language, and dance. They carved the rivers, filled the seas, and built the mountain ranges. And as they brought the world to life, the Ancestors walked the land, naming the places and singing songs of the creation.

In the centre of the continent that would one day be called Australia, the Ancestors dreamed a long chain of mountains, stretching east-west across the red, level country of the desert. They dreamed billabongs and rivers, ghost gums and animals. They filled the waters with creatures and the country with food. Then the people came and sang their songlines, which radiated out through the chasms and gaps to the distant corners of the land. And the Ancestors returned to their slumber.

In April 1862, the explorer John McDouall Stuart entered the MacDonnell Ranges about 50 km to the west of modern-day Alice Springs. Stuart and his party of 10 explorers had set off from Adelaide the previous October, hoping to cross the Australian continent from South to North and establish a route along which a telegraph line could be built. He named the MacDonnell Ranges after Sir James MacDonnell, who was the Governor of South Australia at the time.

Stuart described the ascent of the range as “…the most difficult hill I have ever climbed.” To Stuart and his party, the ramparts of the MacDonnell Ranges appeared more like the bloodstained battlements of a castle than a range of hills. The cliffs and peaks of the ranges change colour during the day: glowing purple in the early morning, changing to deep red at noon, then fading to crimson in the evening. The twisting gullies and crumbling rock formations, dotted with trees and scrub, and bent into strange shapes by the shimmering heat haze, must have made the MacDonnelles look almost impenetrable.

Stuart was unique in his approach to exploring the arid, unknown centre of Australia. Whereas previous expeditions had ignored the local people and their knowledge, Stuart learned from them. He understood that the local people had lived in these harsh, wild environments for thousands of years so they knew how to live off the land and how to find water. This understanding and acceptance of Aboriginal culture and knowledge enabled Stewart to ultimately pioneer the first route across the Australian continent. His name is commemorated in the Stuart Highway which today runs from Port Augusta in South Australia, all the way to Darwin in the Northern Territory 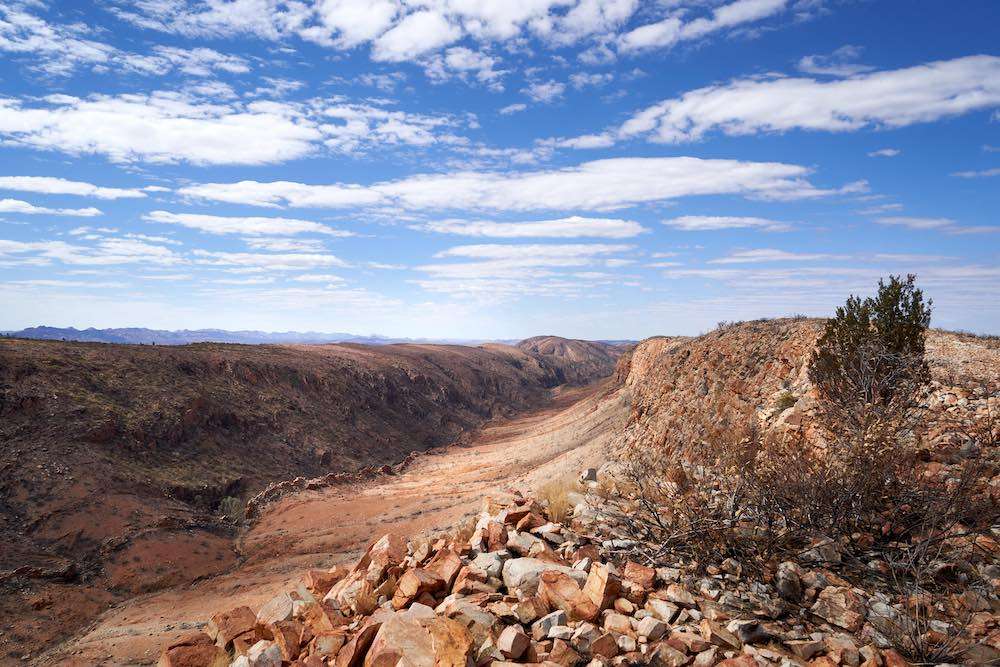 The Arrernte people have lived in this part of Central Australia for tens of thousands of years. The Arrernte (pronounced “arr-en-der”) can be divided into three mobs (groups) according to which region of the MacDonnell Ranges they occupy.

The Central Arrernte belong to the country around Mparntwe (Alice Springs). In their oral traditions, the Arrernte tell that their landscape was shaped by caterpillars and wild dogs. They have numerous sites of traditional importance in and around Alice Springs including Emily Gap/Anthwerrke, Billy Goat Hill/Akeyulerre, Heavitree Gap/Ntaripe, Anzac Hill/Untyeyetwelye, and Mt Gillen/Aihekulyele.

The Eastern Arrernte mob belong to the country of the Eastern MacDonnell Ranges. Their stories tell of the Caterpillar Dreaming that called their lands into being. Places such as Corroboree Rock, fifty kilometres east of Alice Springs, are important sites sacred to the men of the Eastern Arrernte. This part of the MacDonnells is rich in traditional rock art and at N’Dhala Gorge, over 6,000 petroglyphs (rock engravings) trace the people’s history of their land.

West of Mparntwe, the Western Arrernte mob are the people of the landscapes traversed by the Larapinta Trail. Their rich traditions have brought to life the names of the natural wonders that you will encounter as you walk the trail. The Dreamtime stories of the landscape are written in the rocks and billabongs of the West Macdonnells, and as you walk the Larapinta Trail you can observe for yourself how these stories came into being.

The Larapinta trail was the brainchild of a Northern Territory Conservation Commission planner named Allen Ginns. Originally, the parks of the Northern Territory were simply a bunch of small, disconnected reserves scattered amongst the West MacDonnell Ranges. Ginns was tasked with putting together a proposal to link up the discrete sections of reserve land into a continuous National Park.

Ginns gained the Northern Territory Government’s approval for the concept of a park, and for a trail spanning the park’s entire length. He was involved both in the planning and construction of the Larapinta trail before he left Alice Springs in 1996.

The Larapinta trail that people walk today has come a long way from its humble and harsh beginnings when it was carved out of the landscape with the help of prison labour volunteers. Ginns and his team poured over hundreds of maps and aerial photos in order to determine how the trail could function and how it could best span the rugged and distinctly different landscapes of the MacDonnelles.

With the information gleaned from the maps and from numerous helicopter flights over the ranges, Ginns and his team were able to define a corridor that spanned the West MacDonnells from one end to the other. Once the traditional owners of the country had approved access to their sacred sites, Ginns set out to walk the entire trail. The scale of such a massive undertaking, in such remote locations, meant that help had to be sought. It came in the form of 12 prisoners from the low-security Alice Springs Correctional Facility. In order that the prisoners could be allowed to work on the trail, parts of Simpsons Gap and Serpentine Gorge needed to be rezoned as prisons. For their part, the prisoners were happy to be out on the ground, away from the prison, with picks and shovels, and working in the heat.

The Larapinta Trail comprises 12 sections, each one traversing a different set of landscapes and natural features. The trail is 223 kilometres in total length and the sections vary in length from 9 kilometres to 31 kilometres. Each trailhead is equipped with facilities of varying standards but every trailhead has a water supply and some sort of shelter.

For people walking the trail from end to end, it will take anything from 9 to 12 days depending on your fitness and how fast you wish to move. The landscape out here is harsh, tough, and rugged, and hikers are encouraged to take their time rather than rush through. Indeed, one of the founding philosophies of the trail’s creators was that people should take their time and appreciate the rich natural and traditional features of the landscape.

Of course, there will always be people who want to set records of different kinds and the record for the fastest time to run the trail is just under 41 hours. But however you wish to experience the Larapinta trail, whether in sections or End2End, or even by running, you will be immersing yourself in one of Australia’s most stunning, interesting, and captivating landscapes. So take your time. Look around, absorb the natural and traditional beauty in this amazing part of Australia as the Larapinta Trail takes you on a journey of history and culture in this landscape of solid rock.