Across the Red Ranges: Highlights of the Larapinta Trail

West of Alice Springs, the western section of the MacDonnell Ranges rises in a series of parallel red ridges, stretched out across the wide, horizontal landscape of Central Australia. Known as Tjoritja by the local Arrernte people, the ranges run from Heavitree Gap, at Alice Springs, to beyond the distant heights of Mount Zeil, the highest peak in the range.

The Larapinta Trail spans this landscape of hidden waterholes, ragged escarpments, and chili-red sand cloaked in the muted colours of the Centralian flora. The trail crosses some of the world’s oldest geological formations, which contain rocks of igneous (volcanic), metamorphic (changed by temperature and pressure), and sedimentary origin. Around 600 species of flora adorn the landscape of the MacDonnells, ranging in size from the silvery spinifex grass to the tall, shapely ghost gums along the watercourses.

As a hiker on the Larapinta Trail, you will encounter many of the unique native animals who live amid this beautiful and challenging environment, including rock wallabies, Perentie lizards, wedge-tail eagles, and dingoes.

You can challenge yourself by hiking the entire trail or take a more relaxed approach and just sample some of the trial’s twelve sections. Each section of the Larapinta Trail can be accessed by car or four-wheel-drive, making it easy to join or leave the trail at any start or finish point. All of the trailheads have a water supply and campsites, and some have free gas barbecues.

This part of Australia has some fascinating human and natural history. Over the course of the next few months, we will not only be featuring stories about the Larapinta Trail but also about some of the superb historical and natural sights that you can find in the area.

The Larapinta Trail is widely regarded as one of Australia’s best long-distance walks. In today’s blog, we are going to take a brief tour of the must-see points across the Western MacDonnell Ranges. So let’s swing up our swags, figuratively speaking, and take a look at some of the Larapinta Trail’s highlights.

The Alice Springs Telegraph Station marks the start (or finish, depending on which direction you’re walking) of the Larapinta Trail. Established in 1872, the telegraph station was part of the Overland Telegraph Line which spanned the continent from Port Augusta in the south to Darwin in the north.

But, of course, the “singing line”, as it was called, was not the first messenger service in this part of Australia. For thousands of years, Aboriginal people had gathered at the springs to exchange knowledge and goods, and to perform ceremonies. Their songlines radiated out from the springs, which they called Mparntwe, across the vast distances of the continent, carrying their legends and traditions.

Following the successful first crossing of the continent from south to north by the explorer John McDouall Stuart in 1860, the Overland Telegraph Line (OTL) was built to connect Australia with the rest of the world. In those pre-internet days, messages from London, for example, could be sent to Australia in a few hours. Prior to the construction of the OTL, news and current affairs took many months to reach the colony by ship.

The telegraph station operated until 1932 when it was superseded by a more modern facility in the township of Stuart (Alice Springs’ original name). The station’s buildings were gazetted as a historic reserve in 1963. Today, visitors can explore the restored stone buildings of the station and learn about its history through interactive displays in the museum. Guided tours operate at regular intervals every day.

Best of all, the Trail Station Café is open seven days a week to reinvigorate you as you complete the Larapinta Trail or set you up for your time in the wilderness with a last latte. 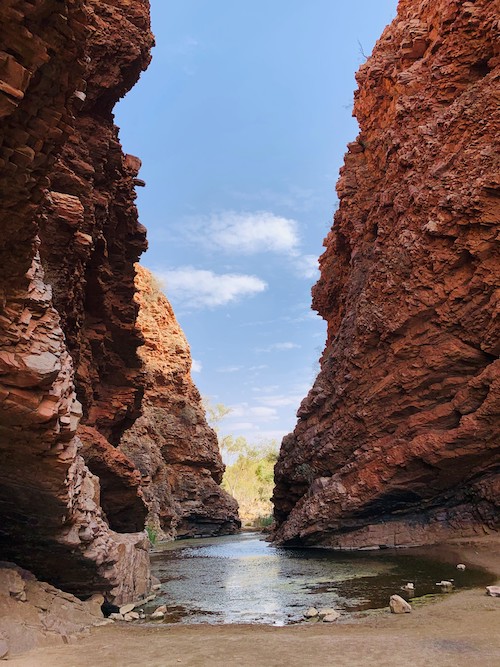 In the Dreamtime, Rungutirpa was the mythical home of a group of giant goanna ancestors. This is one of the most prominent of the many gaps in the West MacDonnell Ranges, and several dreaming stories and songlines pass between the towering cliffs of Rungutirpa, or Simpson’s Gap, to use its European name.

A permanent billabong (waterhole) lies within the shady confines of the gorge and black-footed wallaby can be spotted at dawn and dusk among the crevices and ledges. Ancient ghost gums dot the sandy bed of Roe Creek and there are some large stands of mulga. Photographers will love the view from Cassia Hill, overlooking Simpsons Gap. In the evening, the setting sun turns the ranges to pink and mauve

Simpsons Gap lies at the end of Section 1 of the Larapinta Trail. It is 23.8 kilometres from the trailhead at the Overland Telegraph Station and hiking time is around nine hours over reasonably easy terrain. Alternatively, you can drive to Simpsons Gap from Alice Springs along the Larapinta Way. The access road to the gap is suitable for 2WD vehicles.

Located at the junction of Sections 6 and 7 of the Larapinta Trail, Ellery Creek Big Hole is a popular swimming spot for Alice locals looking to cool off on hot summer days. Carved over millennia by the waters of Ellery Creek, this large, permanent billabong sits framed by massive cliffs of rough, weathered dolomite rock. The area is internationally regarded as a significant geological site and the three-kilometre Dolomite Walk through the gorge will introduce you to the fascinating story of Earth’s history told by the strata here.

The Western Arrernte Aboriginal people call the waterhole Udepata. It is the site of a Honey Ant Dreaming story. A Fish Dreaming story is also connected with Ellery Creek Big Hole. Arrernte women have traditionally gathered the native tobacco known as pitchuri from the surrounding country.

The waterhole is ideal for swimming during the summer months but you need to be aware that the water is very cold, especially during winter, the Larapinta Trail hiking season. Several people have succumbed to hypothermia here. There are also submerged rocks and tree trunks hidden beneath the water so be very careful when diving or jumping.

Located at the junction of Sections 9 and 10 of the Larapinta Trail, Ormiston Gorge presents a very different aspect to the short, sharply-defined gorges at Ellery Creek and Simpsons Gap. Here, the Ormiston River has carved a long, deep channel through the quartzite rock of the West MacDonnells. The river itself now flows along a sandy channel at the base of the gorge, framed by stands of ghost gums (Corymbia aparrerinja) and dotted with billabongs.

The upper edges of the gorge form an elliptical rim known as a pound, and the three-hour Ormiston Pound Walk will take you up to the western edge of the pound before looping back down through the gorge. There are spectacular views of the ranges to be had from the pound’s rim and interpretive signage will keep you informed about the rich geological history of the area.

Ormiston Gorge has a fascinating range of native flora including relic species from Central Australia’s tropical past. The area is also the habitat of the central rock-rat (Zyzomys pedunculatus), an endemic species of rodent that was thought to be extinct until it was rediscovered here in 1996.

Glen Helen Gorge is a place of perfect reflections. Where the Finke River entwines itself between bluffs of red and ochre sandstone, the billabongs and lagoons create mirror images of the surrounding landscape. The local Arrernte people of the West Macdonnell Ranges have lived in this lush and reedy paradise for thousands of years. To them, Glen Helen Gorge is known as Yapalpe and the Finke River is called Larapinta meaning, appropriately, “serpent.” The traditional owners believe that the waters of the gorge are the home of a powerful Rainbow Serpent and are therefore off-limits to swimmers.

The Finke River was named after an Adelaide financier by John McDouall Stuart on his way across Australia in 1860. At the time, he could not have known that the Finke is one of Earth’s oldest riverbeds. The river only flows a few times every century and is one of the four rivers that form the catchment of Lake Eyre.

For hikers on the Larapinta Trail, Glen Helen Gorge lies near the junction of Sections 10 and 11. There is a large shelter with good facilities. There is no road access to this campsite and the nearby (5km) Glen Helen Gorge Resort is currently closed.

If you are hiking the Larapinta Trail, Mount Sonder will either be the culmination of an epic adventure or the beginning of a new one. Although it is only the Northern Territory’s fourth highest peak, at 1,280 metres above sea level, Mount Sonder is no easy stroll. The vertical ascent is over 900 metres from the valley floor and the trail is described as being “rocky, loose and occasionally disappearing…”

But the effort has its rewards. The climb to the summit of Mount Sonder is regarded as one of the highlights of the Larapinta Trail and the 360° views are some of the best on the trail. It is often said that every journey begins with a single step. The lofty heights are an excellent way to start your End2End adventure on the Larapinta Trail. On the other hand, if you have just completed the trail, the summit is a great place to consider what you are going to do on your next epic escapade in these great, red ranges.